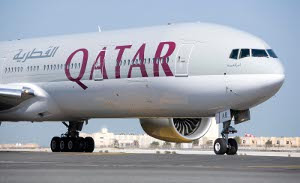 Qatar Airways now operating from Terminal 4 at Madrid's Barajas International Airport
All Qatar Airways’ departures and arrivals will switch to T4 from the effective date.
The Doha-based carrier’s move from Terminal 1 to Terminal 4 will allow passengers access to improved amenities, enhanced baggage facilities, as well as a wider selection of restaurants and retail shopping outlets.
The city of Madrid conveniently connects to T4 by metro, buses and train, and passengers can also take advantage of the ample parking facilities available at Barajas Airport.
Operated by Iberia Airport Services (IBAS), T4 is considered to be one of the world’s most modern and best equipped terminals.
Thanks to the commercial agreement reached with Spanish carrier Iberia, all Qatar Airways passengers will be able to seamlessly connect to their domestic flights operated from T4.
The terminal move will also see the change to IBAS for Qatar Airways’ ground handling, passenger and ramp handling services. Qatar Airways check-in counters at Terminal 4 will be 910 to 917.
Additionally, passengers flying in Qatar Airways’ Business Class will have access to Iberia’s exclusive VIP lounge, which features executive facilities including a business centre, a variety of dining areas, WiFi internet access and televisions throughout, and much more.
T4 was designed by world known architects Antonio Lamela and Richard Rogers. The award-winning design (2006 Stirling Prize winner) attempts to use its sweeping visual effects to create a stress-free feeling among passengers prior to their journey.
Qatar Airways Chief Executive Officer Akbar Al Baker said that the airline’s services at T4 in Madrid will provide added improvements for travellers, including expanded check-in facilities and enhanced lounge amenities.
“Qatar Airways’ move to Terminal 4 at Madrid’s Barajas International Airport allows the airline to deliver its Five-Star services while operating from one of the world’s most modern terminals.

“In addition, our premium passengers will benefit from a fast track service to quicken security control clearance and will have the opportunity to enjoy the exclusive Five Star services of Iberia’s VIP lounge,” he said.
“Madrid plays an important part in our overall route network and we are pleased to be enhancing our operations here,” added Al Baker.
Qatar Airways introduced its flagship Boeing 777 aircraft on the Doha – Madrid route 12 months ago, featuring 42 seats in Business Class and up to 293 seats in Economy.
The airline currently flies 14-times-a-week from Spain – non-stop daily from both Madrid and Barcelona to its hub in Doha with convenient onward connections to destinations across the Middle East, Africa, Asia and Australia.
All passengers are offered the convenience of online check-in, up to 36 hours before departure through www.qatarairways.com.
Qatar Airways now flies to 110 key business and leisure destinations across Europe, Middle East, Africa, Asia Pacific, North America and South America with a modern fleet of more than 100 aircraft. By 2013, Qatar Airways plans to serve over 120 destinations worldwide with a fleet of more than 120 aircraft.
During 2012, Qatar Airways will launch flights to nine new destinations: Baku (Azerbaijan), Tbilisi (Georgia), Kigali (Rwanda), Gassim (Saudi Arabia), Helsinki (Finland), Zagreb (Croatia), Mombasa (Kenya), Zanzibar (Tanzania) and Perth (Australia).

Qatar Airways has orders worth over US$ 50 billion for more than 250 aircraft, including Boeing 787s, 777s, Airbus A350s, A380s and A320 Family of aircraft. The rapid expansion of Qatar Airways prompted the State of Qatar to embark on one of its biggest projects – the construction of a brand new international airport in Doha, which is scheduled to open in 2012.
In addition to winning Skytrax’s prestigious Airline of the Year 2011 award last summer, Qatar Airways was named Best Airline in the Middle East for the sixth year in a row, and its Premium Terminal at Doha International Airport was named Best First Class Airline Lounge. For more information, visit www.qatarairways.com. Skytrax is the only global independent passenger survey monitoring airline standards and is considered the ultimate benchmark for excellence in the airline industry.