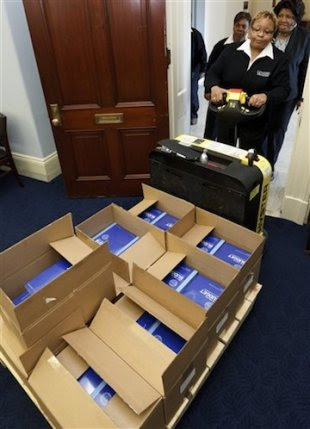 Copies of the White House budget are delivered to the House Monday. (J. Scott Applewhite/AP)
On Monday morning, President Obama sent to Congress his federal budget for fiscal year 2013, a non-binding blue print of the White House's spending priorities that calls for raising taxes on the wealthy, cutting spending in certain areas of government and increasing the budgets of infrastructure projects and job training programs.
If implemented, the White House says that the plan would decrease the federal deficit by $4 trillion within the next decade, although it leaves the federal government with a budget shortfall of $901 billion by the end of fiscal year 2013. Obama introduced his budget in a speech at the Northern Virginia Community College near Washington, D.C.
"The main idea in the budget is this: At a time when our economy is growing and creating jobs at a faster clip, we've got to do everything in our power to keep this recovery on track," Obama said. "Part of our job is to bring down our deficit, and if Congress adopts this budget, then along with the cuts that we' already made, we'll be able to reduce our deficit by $4 trillion by 2022."
"The last thing we need is for Washington to stand in the way of America's comeback," he went on to say, calling on Congress to extend a payroll tax cut, which expires at the end of this month, "without drama, without delay."
The Budget Control Act, passed by Congress last August to end the damaging stand-off over the debt ceiling, cut discretionary spending by $900 billion over the next decade. That all but forced the White House to make major cuts to discretionary spending across the board -- including agencies like the National Institutes of Health and the Food and Drug Administration -- in today's budget proposal.
The plan unveiled Monday also includes $360 billion in cuts to federal health programs like Medicare and Medicaid. Most of those cuts come from reduced payments to providers, including drug companies. By contrast, a plan put forward last year by House Budget Chairman Paul Ryan (R-Wisc.), and embraced by much of his party, calls for a broader restructuring of Medicare; many analysts say cuts in the Ryan plan would fall more heavily on future beneficiaries.
Congressional Republicans criticized the budget, citing the tax increases and calling the level of deficit reduction in the plan inadequate.
"This budget does nothing to prevent the bankruptcy of critical programs, threatening the health and retirement security of current and future seniors," said Ryan in a statement.
The GOP also knocked Obama for submitting a budget that does not cut the federal deficit in half by the end of the president's first term, a promise Obama made in February 2009.
In the Senate, Minority Leader Mitch McConnell (R-KY) vowed to introduce the President's budget as a bill--largely a symbolic gesture intended to embarrass the White House--in the upper chamber. The last time the Democrat-controlled Senate voted on the president's budget in 2011, it was unanimously defeated.
Republican presidential candidate Mitt Romney panned the budget for not addressing entitlements like Social Security and Medicare, and vowed to overhaul the way the government spends on the programs.
"The President has failed to offer a single serious idea to save Social Security and is the only president in modern history to cut Medicare benefits for seniors," Romney said in a statement in which his campaign also referred to the budget as "an insult to the American taxpayer."
"I believe we can save Social Security and Medicare with a few commonsense reforms, and," Romney added, "unlike President Obama — I'm not afraid to put them on the table."
One of Romney's rivals for the GOP nomination, Rep. Ron Paul, also slammed the plan.
"When President Obama talks about spending 'cuts' it's always some plan that will supposedly unfold over a decade and that the next president or Congress can change at whim," Paul's campaign said in a statement on its website. "In other words, cuts never happen. But budget deficits, as evidenced above, happen every year. And they will continue to happen every year. President Paul would offer $1 trillion cuts in the first year."
And Grover Norquist, the influential small-government conservative who runs Americans for Tax Reform, was even more dismissive. "Obama's 'new' budget: higher taxes, higher spending, higher debt. Who is surprised?," he tweeted.
Both Republicans and Democrats have press conferences planned Monday afternoon to address the details outlined in Obama's plan.
Zachary Roth contributed reporting.
More information! Here