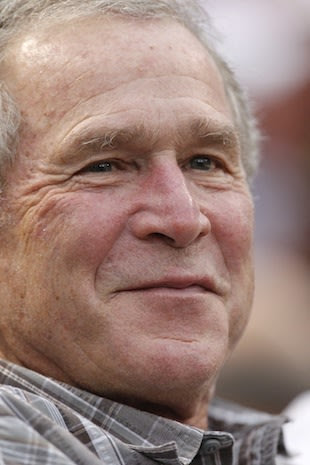 Former President George W. Bush at a baseball game in Arlington, Texas. (LM Otero/AP)
Add former president George W. Bush to the list of no-shows at the Republican National Convention in Tampa. (The Democrats have their own issues on the convention-skipping front).
Bush, who has mostly kept out of sight since leaving office in January 2009, was "grateful" for an invitation to the gathering that will formally nominate Mitt Romney. "But in keeping with his desire to stay off the political stage at this point in the post-presidency, he respectfully declined the invitation," spokesman Freddy Ford said in a statement.
"He supports Governor Romney and wants him to succeed.  President Bush is confident that Mitt Romney will be a great President," Ford said.
مرسلة بواسطة Mohammed في 2:17 ص