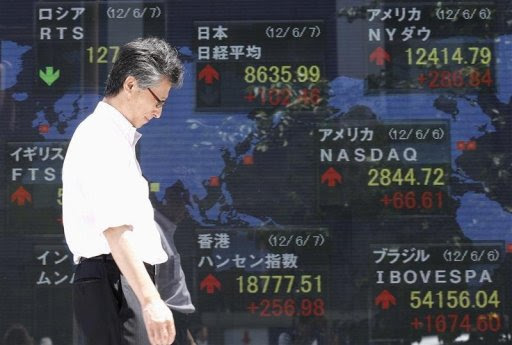 By Chikako Mogi
TOKYO (Reuters) - Asian shares extended their rally on Monday as fears of an economic hard landing in China subsided, but profit warnings dented gains in Chinese shares, highlighting the impact of the country's slowdown on local and multinational firms.
Gains in equities and oil were capped as traders awaited Federal Reserve Chairman Ben Bernanke's semi-annual testimony to the U.S. Congress on the economy set for Tuesday and Wednesday.
"Markets are settling back into wait-and-see mode ahead of testimony by Fed Chairman Bernanke to US lawmakers on the state of the economy and potentially, the central bank's policy options," ANZ Bank said in a research note.
Investors will seek clues on the Fed's stance over a stronger monetary policy to support the U.S. recovery, after central banks from Europe, China and Brazil earlier this month cut interest rates to bolster fragile growth.
Bernanke is expected to repeat that the Fed will take further easing measures only if necessary, which could dampen hopes for more immediate stimulus and weigh on risk appetite while supporting the dollar.
"He'll certainly suggest that it's possible, but ... markets may just come away a little bit disappointed," said Mitul Kotecha, head of global foreign exchange strategy for Credit Agricole in Hong Kong, referring to a third round of outright bond purchases, a form of stimulus known as quantitative easing.
Markets are also looking to a flurry of earnings and business outlooks this week from U.S. banks, consumer staples companies and industrials to determine if the global economy is continuing to lose momentum.
European stocks were likely to open flat to slightly lower, with Asia's positive tone offset by a 0.2 percent drop in U.S. stock futures that indicated a weaker start in Wall Street. (.N)
Financial spreadbetters were calling the main indexes in London (.FTSE), Paris (.FHCI) and Frankfurt (.GDAXI) to open flat to down 0.3 percent. (.EU) (.L)
MSCI's broadest index of Asia-Pacific shares outside Japan <.MIAPJ0000PUS> added 0.3 percent, after jumping 1 percent on Friday. The materials sector <.MIAPJMT00PUS> led the gains, followed by the energy sector <.MIAPJEN00PUS>.
The resource-reliant Australian equity market (.AXJO) was Asia's top performer with a 0.5 percent gain as worries about China's economy eased. China is Australia's largest trade partner.
But Chinese shares lagged as profit warnings continued to pour in from mainland firms hit by the slowdown in consumer and corporate demand at home and abroad.
Hong Kong shares (.HSI) edged higher but were weighed down by warnings from firms such as ZTE Corp <0763.HK> <000063.SZ>, China's second-largest telecoms equipment maker, and falling shares in Asia's largest developer, Sun Hung Kai Properties <0016.HK>, after the billionaire brothers who run the company were charged in a bribery case. Shanghai shares (.SSEC) lost 1.2 percent.
"There's going to be more of such profit warnings in the next few weeks, leading up to the earnings season in August. Even with policy easing (in China), it's going to take a while before earnings improve," said Jackson Wong, Tanrich Securities' vice-president for equity sales.
Japanese markets were closed on Monday for a public holiday.
China on Friday reported that second-quarter gross domestic product grew 7.6 percent from a year earlier, in line with expectations. After two interest rate cuts in less than a month, many market watchers had been bracing for a weaker reading.
But the relief rally that followed the data suggested markets were largely short covering from oversold conditions, as risk appetite has been curbed by concerns about corporate earnings, and the protracted euro zone debt crisis adding to global economic uncertainty.
China's Premier Wen Jiabao said efforts to stabilize the economy are working and the government will beef up steps in the second half of 2012 to boost policy effectiveness and foresight, the official Xinhua news agency reported on Sunday.
EYE EUROPE, GRAINS
Oil pared earlier gains, after settling up more than $1 on Friday, with Brent crude up 0.2 percent at $102.57 a barrel and U.S. crude easing 0.4 percent at $86.74.
Grains continued their weather-driven rally on Monday, as Chicago new-crop corn jumped 4 percent and soybeans gained about 2.5 percent, with both markets climbing to contract highs on forecasts of further supply tightness, dragging wheat higher as well.
Analysts expect further upside in grains, which could stoke a resurgence in commodities prices and inflationary pressures, adding to adverse effects on fragile economies.
The euro was at $1.2234, hovering near its two-year low of $1.2162 hit on Friday, as investors remained wary about whether borrowing costs in highly-indebted Spain and Italy would start to climb again.
Italian banks shrugged off Moody's downgrade of Italy's credit rating to near-junk status and helped Rome sell the maximum amount of bonds it was targeting at an auction on Friday, but 10-year yields rose to near 6 percent.
Reflecting investor jitters over the euro, currency speculators raised their bets in favor of the U.S. dollar in the latest week, while boosting their positions against the euro to their highest in a month, the Commodity Futures Trading Commission data showed on Friday. (IMM/FX)
As flight to safety pushed government bond yields in the United States and Germany to or near record lows and to nine-year lows in Japan, yield-hungry investors sought returns in High Yield and Emerging Market Bond Funds in the second week of July, EPFR Global said on Friday.
Asian credit markets were lackluster, keeping the spread on the iTraxx Asia ex-Japan investment-grade index steady from Friday.
(Additional reporting by Masayuki Kitano in Singapore and Vikram Subhedar in Hong Kong; Editing by Michael Perry & Kim Coghill)
مرسلة بواسطة Mohammed في 12:52 ص