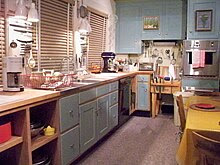 Julia Child's kitchen at the Smithsonian National Museum of American History.
In the 1970s and 1980s, she was the star of numerous television programs, including Julia Child & Company, Julia Child & More Company and Dinner at Julia's. For the 1979 book Julia Child and More Company she won a National Book Award in category Current Interest.[19] In 1981 she founded The American Institute of Wine & Food,[20] with vintners Robert Mondavi and Richard Graff, and others, to "advance the understanding, appreciation and quality of wine and food," a pursuit she had already begun with her books and television appearances. In 1989, she published what she considered her magnum opus, a book and instructional video series collectively entitled The Way To Cook.
Child starred in four more series in the 1990s that featured guest chefs: Cooking with Master Chefs, In Julia's Kitchen with Master Chefs, Baking With Julia, and Julia Child & Jacques Pépin Cooking at Home. She collaborated with Jacques Pépin many times for television programs and cookbooks. All of Child's books during this time stemmed from the television series of the same names.
Child's use of ingredients like butter and cream has been questioned by food critics and modern-day nutritionists. She addressed these criticisms throughout her career, predicting that a "fanatical fear of food" would take over the country's dining habits, and that focusing too much on nutrition takes the pleasure from enjoying food.[21][22] In a 1990 interview, Child said, "Everybody is overreacting. If fear of food continues, it will be the death of gastronomy in the United States. Fortunately, the French don't suffer from the same hysteria we do. We should enjoy food and have fun. It is one of the simplest and nicest pleasures in life."[23]

Julia Child's kitchen
Julia Child's kitchen, designed by her husband, was the setting for three of her television shows. It is now on display at the National Museum of American History in Washington, D.C. Beginning with In Julia's Kitchen with Master Chefs, the Childs' home kitchen in Cambridge was fully transformed into a functional set, with TV-quality lighting, three cameras positioned to catch all angles in the room, and a massive center island with a gas stovetop on one side and an electric stovetop on the other, but leaving the rest of the Childs' appliances alone, including "my wall oven with its squeaking door."[24] This kitchen backdrop hosted nearly all of Child's 1990s television series.
مرسلة بواسطة Mohammed في 8:25 ص