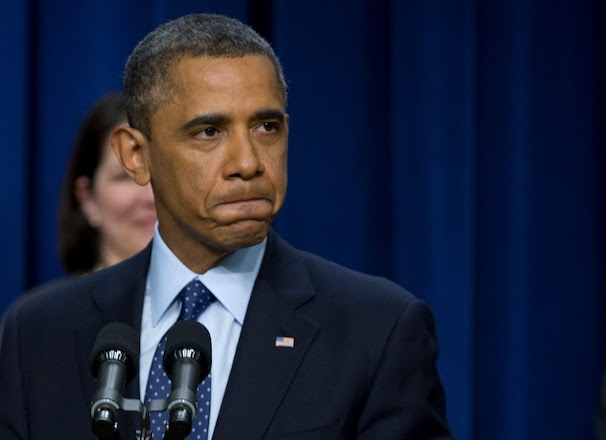 President Obama said Monday that an agreement to avoid the worst effects of the year-end fiscal cliff is “within sight,” but he stressed repeatedly that a deal being negotiated by Vice President Biden and Senate Minority Leader Mitch McConnell is “not done” yet, and he called on lawmakers to remain focused on the needs of the American people rather than politics.
In what the White House billed as an event with middle-class Americans, Obama said there were “still issues left to resolve” in the talks. He said he was “hopeful that Congress can get it done. But it’s not done.”

Obama said the potential agreement would prevent federal income taxes from rising on middle-class families, extend tax credits for children and college tuition, provide tax breaks to clean-energy companies and extend unemployment insurance for 2 million Americans.
He would have preferred to “solve all these problems in the context of a larger agreement,” the so-called grand bargain, that would have dealt with spending in a “balanced way,” he said.
“But with this Congress, that was obviously a little too much to hope for at this time,” Obama said, adding that perhaps “we can do it in stages.”
Congressional Republicans immediately pushed back, objecting to comments that one GOP senator described as “heckling Congress.”
The president made the remarks as negotiators moved closer to a deal Monday to cancel historic tax hikes for most Americans. But they were still hung up on spending, with Democrats so far resisting Republican proposals for spending cuts that would come in exchange for delaying automatic spending cuts at federal agencies for just three months.
As Obama prepared to deliver remarks about the “fiscal cliff” at the White House, negotiators for the administration and McConnell (R-Ky.) appeared to have nailed down many of the most critical tax issues, including a plan to let taxes rise on income over $450,000 a year for couples and $400,000 a year for individuals, according to people in both parties familiar with the talks.
McConnell said after Obama’s speech that he and Biden spoke multiple times Monday morning since their first 6:30 a.m. call and managed to resolve their differences on taxes. But he echoed Obama’s contention that the two sides had not yet resolved a dispute about whether to delay automatic spending cuts. McConnell urged Congress to pass the tax agreement — and debate replacing the so-called “sequester,” as the automatic spending cuts are known, in coming months.
“We’ll continue to work on finding smarter ways to cut spending, but let’s not let that hold up protecting Americans from the tax hike that will take place” on New Year’s Day, he said. “We can do this. We must do this.”
Under the proposed accord being hammered out by Biden and McConnell, households earning less than $450,000 would largely escape higher income tax bills, though couples earning more than $300,000 a year and individuals earning more than $250,000 would lose part of the value of their exemptions and itemized deductions, under the terms of the emerging agreement.
مرسلة بواسطة Mohammed في 12:51 م